Today let’s take on another classic, Pirates of the Caribbean.

A Pirate’s Life for You

Board a weathered barge for a treacherous voyage to the 17th century, when rowdy rogues and ruthless rapscallions ransacked Caribbean seaport towns. Sing along as pirates serenade you with their anthem, “Yo Ho, Yo Ho (A Pirate’s Life for Me).”

Sail past haunted Dead Man’s Cove. Navigate cannon fire between a Caribbean fort and a striking 12-gun galleon. Behold boisterous buccaneers drunk on the spoils of plunderin’ as flames engulf a seaside town.

Be sure to keep a spry eye out for Captain Jack Sparrow, from The Pirates of the Caribbean movies.

Magic Kingdom’s Pirate’s of the Caribbean attraction in Adventureland opened on December 15, 1973. This classic Disney ride first opened at Disneyland on March 18, 1967. It’s a boat ride, but when the idea first came about (sometime in the 1950s), the attraction was going to be a walkthrough wax museum!

Pirates of the Caribbean was the last ride Walt Disney himself actually oversaw and worked on before his death in December of 1966. Unfortunately, Walt passed away three months before the boat ride was finished, so he never saw the final product. 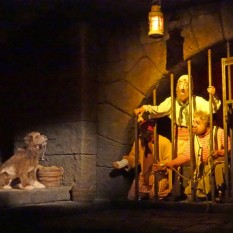 The ride inspired the popular film series and has even been revamped to include many of the films’ characters, including Captain Jack Sparrow and Captain Barbossa. 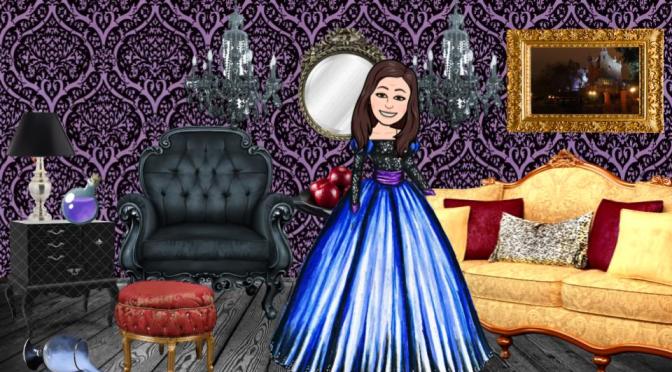 Climb aboard a gloomy Doom Buggy for a grave journey through a labyrinth of haunted chambers. This is always my family’s MUST DO first ride at Magic Kingdom. 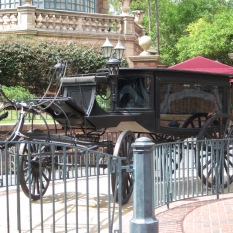 Before you climb into your Doom Buggy, you have to brave the Stretching Room, which uses distraction to make you think you are in an elevator. At Magic Kingdom, it actually does not move. In some of the other parks around the world it does go up or down a level.

The Story Behind the Mansion 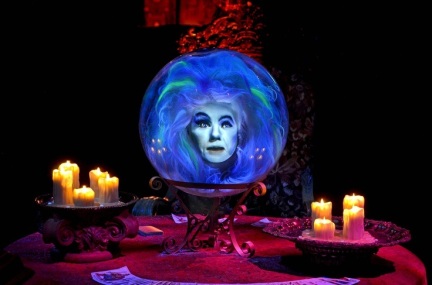 Master George Gracey of Winsocket, Rhode Island, was the owner of the mansion. He received the deed under the grimmest of circumstances when his mother murdered his father. In an attempt to connect with his father, even in death, Gracey turned to the spirit world. Master Gracey met Madame Leota, the seer, in New Orleans and persuaded her to return to his mansion, where she performed séances. Master Gracey grew demoralized and, well… “There’s always my way!” That gentleman hanging from the rafters is Master Gracey. And he’s also Imagineer Yale Gracey. This brilliant human being invented many of the tricks on display at the Haunted Mansion, most famously Madame Leota’s floating head-in-a-jar. As a way to pay tribute to him, they named the character after him.

Leota Toombs isn’t just a character. She was a very real Disney Imagineer who worked on the attraction. She received the honor of voicing her character, whose physical appearance resembles the face in the ball.

The ballroom scene of the Haunted Mansion is full of amazing detail including the waltzing duos, dueling ghosts high above, and a birthday celebration. This is my absolute favorite scene of the ride, I always hope for a breakdown so I can take it all in. If you look down at the dining table, you can spot a trio of plates that have been arranged to form a hidden Mickey!

Let’s climb aboard a Doom Buggy…