The attraction is inspired by Walt Disney’s 1953 animated classic, Peter Pan, which in turn was based on J.M. Barrie’s play and book of the same name about a 12-year old boy who refuses to grow up. 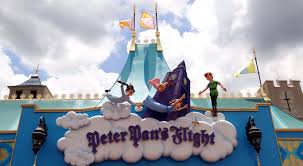 Board your pirate galleon and follow Peter Pan as he beckons you to join him on the flight of a lifetime. Wave goodbye to Nana and join the Darling children on a gentle cruise over London, where Big Ben and Tower Bridge light up the night sky.

Descend into Never Land between glowing volcanoes and sparkling waterfalls. As you swoop into Pirate’s Cove, there’s danger ahead!

Can Peter Pan defeat the dastardly Captain Hook and return his young companions safely to London? Or will someone meet an untimely end… in the jaws of a ticking crocodile?

Set Sail Across the Sky

Peter Pan’s Flight was one of the original rides at Disneyland to open with the park in 1955. Magic Kingdom’s version opened two days after the park’s grand opening.

Imagineers Bill Justice and Bill Martin worked on the Magic Kingdom attraction. Peter Pan’s Flight opened with features that the Disneyland version didn’t have yet.  This included the newest Audio-Animatronics and even had the Indians, Lost Boys and Pirates, oh my! It was similar to Disneyland’s ride, but with some upgraded effects.